Need your puppy delivered right to your door? Please let us know!

Our Samoyed at Cumberland Kennels

Please browse our Samoyed puppies below and after reading our Policies you may continue in reserving one today! 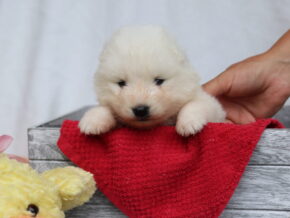 
About the Samoyed breed. 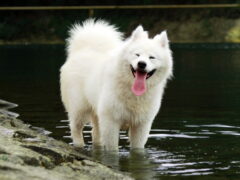 The Samoyed is an old breed developed by nomadic tribes in Siberia to herd reindeer and pull sleds when necessary. These multi-purpose canines came in a variety of colors at first, but the gleaming white has since taken over in most parts of the world. The Samoyed's actual ancestor could be the Soviet Nenet Herding Laika.

Early European explorers immediately recognized the significance of these sturdy, amiable dogs. The Samoyeds arrived in England in the late 1800s, occasionally as presents from Russia's Czar. They are said to have been favored by Queen Alexandra. Many arctic expeditions followed, with "Etah" leading Roald Amundsen's first trek to the South Pole. In many parts of the world, Samoyeds still operate as reindeer herders and sled pullers and family companions.

The Samoyed puppy holds a unique place in the hearts of many dog enthusiasts thanks to his constant smile and friendly demeanor. That lovely, luxurious white coat has us swooning! That bulky coat, by the way, is more than simply a fashion statement. This characteristic allowed this species to labor alongside its semi-nomadic ancestors in subzero temperatures. Samoyeds were used as sled dogs, watchdogs, and herd protectors for their owners because they were resistant to the cold.

The Samoyed is a happy and entertaining dog. These are self-sufficient dogs with a strong sense of intelligence. They thrive on human interaction because they were bred to live in tents with their families in close quarters. Alarm barking is common in Samoyeds, and if left alone for lengthy periods of time, they can become nuisance barkers. They dig to find a suitable resting location, which might be difficult.

Other dogs, people, and other pets who have been raised with Samoyeds get along easily. They're herding dogs who like to chase or nip other dogs. They get along well with children in general, though little toddlers may find them a little too loud. Samoyeds has an excellent physical look and a nice tail around the back. Having this companion will definitely brighten your day.

The ears are spiky and the head is big, with the edges of the lips flaring up in a unique smile. Samoyeds should have black pigmentation around the eyes, nose, and lips despite their white coat. The sparkling white coat of the Samoyed breed is its crowning glory. As one would expect from a northern breed, this breed has a thick, rough, straight coat with a strong undercoat. The hue is a stark white, despite biscuit or cream coloration being permissible. The coat of the Samoyed stands out from the rest of the dog, giving him a fluffy appearance.

Caring and Living With Samoyed

Samoyeds are another breed that is extremely easy to care for, requiring only a minimal amount of high-quality food to thrive. Obesity can readily develop as a result of too many snacks or insufficient exercise. Samoyeds are sturdy, long-lived canines that can live to be 12 or 14 years old. These are energetic canines who require a daily routine. Samoyeds like training and will gladly compete in obedience, agility, herding, sledding, and weight pulls because they are so responsive to people.

The Samoyed is a dog that is both intelligent and responsive. He does, however, have an independent streak, which can make training more difficult. The best instruction is firm but caring. All those years spent as working dogs have left an indelible mark on this breed—Samoyeds thrive when given a task. Regularly assigning tasks to your Samoyed puppy will keep him pleased. When left alone over long periods of time, they do not thrive.

A Samoyed puppy will usually get along with other pets, even cats. They're also OK around little children, as long as you don't mind their herding propensity. This breed has some disadvantages. For one thing, if left to their own devices, Samoyeds have a proclivity for wandering. When bored, they can be obstinate during training and destructive when bored. It might become a nuisance if excessive barking isn't addressed during puppyhood. Samoyeds usually bark to alert strangers before greeting them with a wagging tail and tongue.

Samoyeds can be independent. Therefore early training and socialization with a firm but gentle touch are recommended. They thrive when given tasks to complete, even if it's merely pulling a cart in a parade. Grooming should be done at least once daily, especially during shedding season. Knowing what you're getting yourself into when you buy a Samoyed puppy is a crucial part of being a good pet owner. Prepare yourself for an affectionate and pleasant addition to your household.